Life membership is an honour bestowed on one person but can be attributed to many, according to Bunbury and Districts Badminton Association stalwart, Max Strachan. For Max, the life membership would not have come had it not been for many members.

“It takes a lot of other people to keep someone interested and involved heavily for so many years.”

Max’s association with the Bunbury and Districts Badminton Association in an official capacity began back in 1965 when he served as an Association delegate.

Possibly his greatest contribution to the Association and the game has been his involvement in the junior coaching programme since 1971.

The record of junior success within the Association says much for the interest shown by the senior members.

The Association has coached many under-age State representatives over the years due mainly to facilities and the high standard of coaching available.

He completed a diploma in coaching in 1971 and held an umpire’s jacket from the Australian Badminton Umpire’s Committee.

Max’s association with the club was not limited to official roles as he had an outstanding competition record at both Association and State levels.

His playing started in the novice ranks and, after only four years during which he won many B and A-reserve titles in Perth, Busselton, Bunbury, Fremantle Collie and Wagin, became a Bunbury A grade player.

Over the years he held many Bunbury singles and doubles titles. He also achieved three State doubles crowns.

In 1972 he trained for the State side and was included in the final eight from which the final five were chosen. He captained Bunbury’s winning Country Week teams in 1974 and 1975 and was captain of the team representing Bunbury at the South-West Shield in 1972, 1974, 1979 and 1980, with the team winning on all occasions. He was also selected to play for the Country combined side versus the State team from 1974-1977.

After eventually retiring from the sport in 2000 Max continued to play a mentoring role to many players for many years, maintaining a keen interest in the Association for the rest of his life. Along with his wife, Anne, he was a regular supporter of the annual South-West Bunbury Open tournaments. Max was also a legendary Master of Ceremonies on many very popular fundraising quiz nights, combining his knowledge and his amazing memory with his great sense of humour.

Max passed away on the 31st December 2021, leaving behind a lifetime of achievements not only relating to badminton but to many other areas of his life.

His funeral is to be held at the Bunbury Crematorium in Carey Park on Friday the 21st of January 2022 at 1pm.

With thanks to The SouthWestern Times-Thursday 1st October 1981 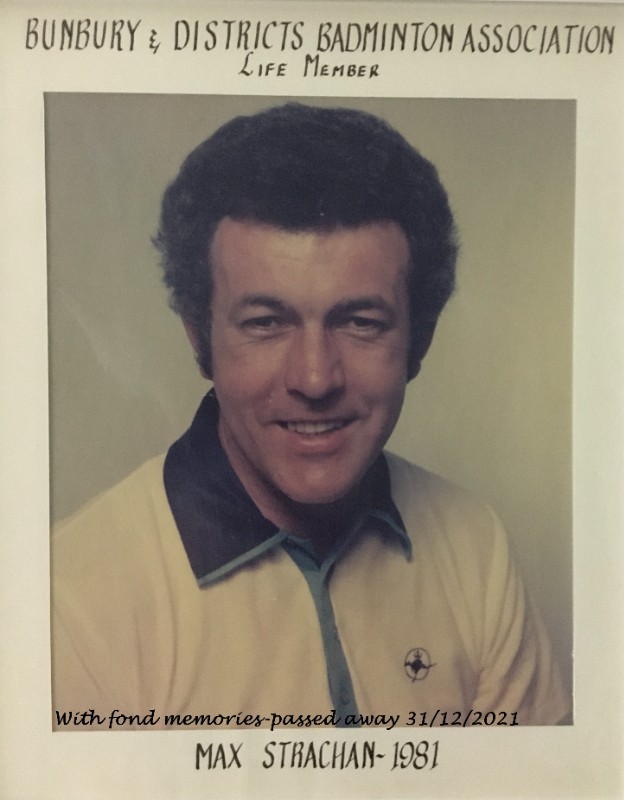