Matches this week were all close affairs despite the game scores at the end of the evening.

Bunbury Appliances put up a strong showing against current powerhouse team Rosemont Park. An epic game between Nathan Campbell and Thomas Rowland saw every point hard-fought. Thomas would be one of the form players this season, having given veteran Nigel Smith a lesson the previous week. Thomas eventually came out the victor however both players looked spent as they came off court. Our own head coach, Robert Italiano, refused to go down in his singles game against Joel Gragasin, the latter pushing Robert all the way. Robert was the eventual winner of their game, calling on his years of experience to have the final edge. Rosemont Park won comfortably by end of proceedings tonight.

The match between third and fifth on the ladder saw it go down to the wire. With the Smashers missing their lead man, Lee Scurlock, who was off gallivanting around Europe, George Calexterio stepped into the breach. Between George and his team-mate Koby McKosker, they contributed to a result that nearly won the Smashers the match. For Smash & Dash, Mark Dhu put in a big effort to win four of his five games and, along with Michelle McKosker, delivered the impetus for their team to scrape in with a win by just 5 aces.

In the third match The SWAT team showed they don't deserve to be on the bottom of the ladder by pushing second place Forrest Dental to the last match. New recruit Naseeb battled hard for his team in his debut but the stand-out was team captain Reece Wright, who lead from the front. Reece won three of his three of his five games against dynamite player Billy Wauhop. A quiet achiever this season has been Pan Pan, who has won five of her eight singles games- a big  step up from her individual results last season. Her combined points accumulation has her as the current leading lady point scorer in the competition. SWAT team needed only to have won one of their last three games to have produced a different result tonight.

A reminder that we broadcast on Facebook live the matches on court 2 each week for those who would like admire their abilities/hang their heads in shame on social media. 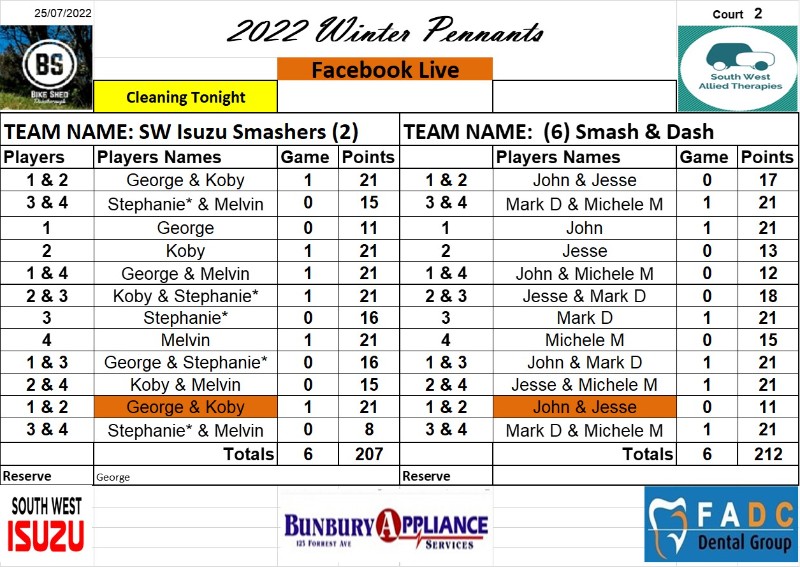 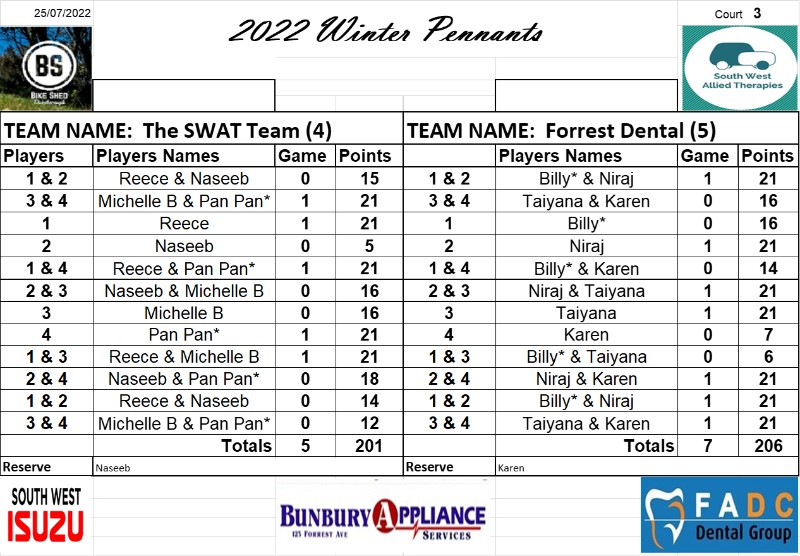